“Alphonse Mucha is one of those artists who for a long time flew under the radar,” says Lisa McDermott, Director of the Carnegie Arts Center. While people might not recognize the name, many will recognize what McDermoot describes as “elegant, beautiful, swirling compositions.” The Carnegie Arts Center in Turlock has the honor of premiering the national tour of an exhibit of over 70 of Mucha’s original works.

Mucha was a very versatile artist. In addition to his illustrative and graphic design work, for which he is best known, during his lifetime he engaged in portrait painting, architecture, interior design, mural painting, jewelry design, packaging design, and photography. McDermott explains that Mucha achieved his initial success as a commercial artist, working as an illustrator and graphic designer. His posters, advertisements and packaging designs spread over Paris virtually overnight. He was very well known in his lifetime and admirers of his work included the Parisian actress Sarah Bernhardt. By commissioning posters for her American tour, Bernhardt helped to popularize Mucha in the United States. Perhaps the most recognizable poster for that tour will be part of the exhibit.

This exhibit is one that must be experienced in person, with some posters standing over seven feet tall. The exhibit features original lithographs which were produced during the artist’s lifetime and focuses on the period from 1890 to 1910, which marked the height of his career in Paris. In addition, there are a selection of book covers, sketches, proofs and paintings. 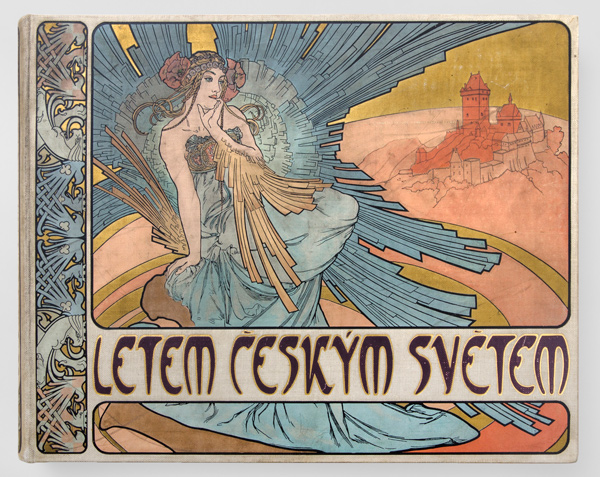 Mucha is credited as being the creator of the Art Nouveau style. Nicholas Lavar, Intern at the Carnegie Arts Center, says, “Because Mucha had a very distinct illustrative style that had a big impact later.” McDermott considers Mucha’s work “part of a contemporary vocabulary.” Art Nouveau forms its own distinctive branch on the contemporary art timeline. McDermott explains that what followed was Art Deco, which featured hard edges and was a sharp contrast to the organic forms emphasized in the Nouveau style. This was followed by Cubism, which ushered in abstraction, which was the pinnacle of the Modern movement. The aesthetic of elegant curves, organic shapes and ethereal forms fell out of fashion until it was embraced by the Psychedelic movement of the 1960s. While the color palette of the Psychedelic posters is dramatically different, the influence of Mucha’s organic motifs and fluid lines is undeniable.

Inspired by this remarkable exhibit the Carnegie Arts Center’s largest fundraising event of the year, the Annual Fall Gala, will transport you back to turn-of-the-century Paris. The evening of Saturday, September 12th will feature a Parisian dinner, cocktails, can-can dancers, live jazz music by Hot Club Faux Gitane, a live auction, a silent auction, and a preview of the exhibit.

This entry was posted in for the locals. Bookmark the permalink.